Home » All Stories » Animated Podcasts: Collaborating with Gary Vaynerchuk and the Growth of Food Fight Studios

Animated Podcasts: Collaborating with Gary Vaynerchuk and the Growth of Food Fight Studios 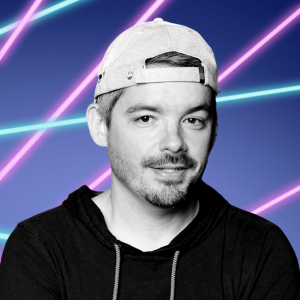 Go ahead, admit it: you haven’t got the slightest clue who we are.

You see the name Food Fight Studios and wonder if we run a bunch of school cafeterias. It’s fine…just give us a moment while we pick up our shattered egos and collect ourselves.

All joking aside (okay, some joking aside), although you’ve never heard of us, you’ve almost certainly seen our work.

If you follow any big-name non-fiction authors, entrepreneurs, speakers, or podcast influencers––such as Gary Vaynerchuk,  James Altucher, Jordan Peterson, Richard Branson, Tony Robbins and more––odds are you’ve seen our work…even if you have no idea who we are.

We’ve been dubbed “the little animation studio behind some of the biggest names in business,” and we take serious pride in that. I mean, seriously: we know next to nothing about SEO or fancy marketing strategies. We only care about two things at Food Fight Studios:

But now it’s time to step out from behind the curtain and share our insider secrets. In each post, we’ll focus on a single animation we created and break it down by three key elements:

What does Other People’s Audience even mean?

We’ll get to that in a minute but first, without further ado, here is the unlikely and incredibly lucky story of Food Fight Studios’ very first influencer relationship and our very first animation.

We are incredibly fortunate to be able to work with the influencers, authors, and entrepreneurs that we do. So, this first blog post is going to start with our own origin story. We’ll tell you exactly how it happened what we learned, and how the Food Fight Studios began.

1. How we connected with influencer, Gary Vaynerchuk, through the power of network effect marketing

So back to the animation that started this whole thing. Here’s the cliff notes version of what happened…

Our Managing Director, Jon Briggs, had been creating the business that would become Food Fight Studios’ predecessor, ParodyTease.com. Parody Tease is a site for the anti-fan or the #unfan. Instead of a site for routing for the teams you love, this site’s content is geared towards sports teams that you love to hate.  The site had gotten so much positive attention that Jon decided to take its parody sports logos to the next level…cartoons.

He had created a ton of animated explainer videos for other businesses he owned in the past but that process was tedious. Often the companies he contracted with were based in India or Pakistan which made communication challenging. The language barrier was one thing, but the time difference added another challenge. It was virtually (pun intended) impossible to get a finished animation that had these essential characteristics — high quality, completed in a timely manner, and affordable. You could have one, maybe two, but never all three in one project. Jon knew he would need to find someone in the U.S. if he was going to get this crazy cartoon idea off the ground.

After a quick search on YouTube, he found a tutorial video uploaded by an animator in Texas. Soon they were creating cartoons together that were getting attention. As all good stories go, however, the early success was not smooth sailing. After several missed deadlines and communication breakdowns it was clear that Parody Tease was going to need a new animator. And that’s when Jon saw the Gary Vaynerchuk ( aka Gary Vee) post that literally changed the course of the business and his life.

Asher Oliver, a self-taught animator, was checking his phone in-between customers at a restaurant he worked at.

He was told by Gary Vee’s team that the animation he created was going to drop at any moment. Asher didn’t get this opportunity of a lifetime by accident. He had followed Gary relentlessly and when Gary asked his audience to submit questions for a new segment called “Ask Gary Vee” Asher jumped at the opportunity. Instead of just submitting a question like everyone else, Asher took a page right out of VaynerMedia’s playbook and did something different to get Gary’s attention. He actually made a short Gary Vee cartoon and asked his question within it.

No one had ever done that before and Gary took note. Not only did he answer Asher’s question in his Hustler’s Digest newsletter but he also asked Asher if he wanted to collaborate on a project with him, something that had also never been done before. He wanted him to animate part of a podcast so that the knowledge he was dropping could be heard, and SEEN, by his audience on Facebook and YouTube. So just like that, Gary sent Asher an audio clip of him talking to James Altucher.

In a few weeks, Asher delivered the final animated podcast. It sounds simple and it was. Gary simply provided the audio and Asher enhanced that audio and created a unique piece of content for him.

Now, this same story is also told in the world’s #1 best-selling book on Twitter and eventually we’ll expand on it in future posts, but for the purposes of keeping this blog under 1700 words we’ll keep the story moving.

The network effect in action

I bet you can guess how this part of the story played out, Jon saw Asher and Gary Vee’s animation instantly fell in love with it, and knew he had to connect with Asher. It was a modern-day bromance. Two creative self-proclaimed “geniuses” from different parts of the world, joining forces for what would become Food Fight Studios, the company that creates animated content for the biggest influencers in business.

Of course, that’s only part of the story and only part of what we do. But that was the network effect in action.

That one bit of unique content provided a service that was so different and so unique it exposed Food Fight Studios to a new network of influencers and entrepreneurs. It also provided added value for Gary Vee and his followers. That network effect catapulted the growth of our business. It put us front and center into the feed of other influencers. And so, Food Fight Studios was on the path to success.

Today, we connect with influencers and create them unique content that builds their businesses and personal brand. That effect multiplies our network and our customers.

2. How we created an animated podcast for social media influencer, Gary Vee

James Altucher is the bestselling author of Choose Yourself, the host of The James Altucher Show, and a serial entrepreneur (he’s founded 20 companies, only 17 of which have been failures!).

With over 40 million downloads, his podcast is consistently rated at the top of the charts. It’s no wonder––he’s interviewed people like Sir Richard Branson, Tyra Banks, Mark Cuban, and, in this episode, Gary Vaynerchuk.

You likely already know Gary Vee as the CEO of VaynerMedia and content marketing extraordinaire, so we won’t waste precious internet ink spelling it out for you further.

So how did we strategically set about turning a podcast into an animation?

We let you see what the characters may be thinking, we animate their thoughts and give an extra dimension to that podcast audio.

Here are a few key lessons from the Food Fight Studios Animation with Gary Vee and James Altucher.

3. Key Takeaways From “The 1% Earners in America with GaryVee and James Altucher”

Here’s a bit of bonus content for you – the key takeaways and Gary Vee’s wisdom from that podcast. You can thank us later…

We helped convey all these key messages in a short 2-minute animation! We’ve got young disillusioned kids, cash with a crown on its head, Gary’s hard-working parents – it’s all in there – giving a new dimension to that interview audio.

What’s the benefit of repurposing your audio into animation?

Let us count the multiple ways that you can now use that new content asset:

Don’t limit yourself to just one medium. We reframed and repurposed Gary’s audio into a video that could reach his Facebook and YouTube audience.  And, we can do the same for you.

The growth of Food Fight Studios was all thanks to that first video with Gary Vee. We are still benefiting from that network effect.

Make sure you look out for our next blog post, where we’ll tell you about a new influencer we started working with as a result of our work with Gary, take you through our process of creating their animation and how they used it. We’ll showcase all our animation styles for you all too.

Find out how you can benefit from network effect marketing with animated content that will grow your business.

We specialize in a diverse range of animation styles, ranging from 3D, motion comic, kinetic typography, and more.  If you have a podcast or audiobook that you’d like to bring to life through animation, get in touch.