A Marriage of Creative Artistry: The Battle Bunnies The crypto space is expanding rapidly. It’s been a tidal wave of opportunity, with new projects popping up to disrupt traditional business models further.

The explosion of cryptocurrency has led to many exciting developments — especially in the non-fungible token (NFT) world.

The Battle Bunnies is the first-of-their-kind, hand-drawn illustrations by world-renowned tattoo artists Frank La Natra and Christa La Natra, with over 100 industry award achievements and 24 years of experience as professional artists.

The initial collection consists of 5,000 pieces categorized into six classes of bunnies with over 400 unique traits available via a collectible token sale on The Battle Bunnies website in March 2022. The artist duo view their soon-to-be-minted NFTs as a space to build a community.

Frank and Christa have long been interested in animation. They both attended the Art Institute of Fort Lauderdale, where they received their Bachelors of Science in Illustration.

At Food Fight Studios, we saw an opportunity to join this project and combine our animation industry experience with the skill of world-renowned artists to bring the Battle Bunny characters to life through animation and VR.

“I’ve been granted the privilege of creating my visions for tattoo fans around the world for many years,” said Frank La Natra, owner of Into the Woods Tattoo Gallery, as well as La Natra Art Studios.

“It’s been a long-held dream to go to the next phase of my artistic abilities in creating characters in the digital space, let alone this new frontier of blockchains.

This partnership with Food Fight Studios, along with the talents and contributions of my wife, Christa, represents a new chapter in our artistic journey while building on a creator economy that has endless and exciting possibilities.”

“NFTs represent a new beginning for the animation industry and opens up endless possibilities for creators to retain control of their work and their fans to participate in the process.” Said Founder of Food Fight Studios and award-winning Animation Producer, Jon Briggs.

“This is a partnership of purpose with Frank and Christa, one my team and I are ready to bring to life with the support of the NFT community embracing ‘The Battle Bunnies.’”

It’s paramount that we pave our own path to define what owning an NFT is all about, which is why we are embracing exciting opportunities within VR and animation with the Battle Bunny team!

The Oculus giveaways at holding levels of 25+ NFTs are a massive part of this NFT drop. We want animation and VR immersion to be a focal part of this community, and we’re providing collectors with the utilities to not only stay involved but massive value on their NFTs built for the long haul.

The collection will be made available first to followers of “The Battle Bunnies” Discord, Join here! Followed by a public release on TheBattleBunnies.io website. For more information about “The Battle Bunnies” and specifics on the release date, as well as future announcements, please visit https://thebattlebunnies.io.

The imaginative NFTs will be available via a collectible token sale on ‘The Battle Bunnies’ website in March 2022 on the Ethereum blockchain, with proof of ownership as an ERC-721 token.

This drop is Phase 1 of a larger planned universe that has begun creative development on the animation front with the partnership of Food Fight Studios.

This NFT partnership will be supporting efforts to evolve the universe of ‘The Battle Bunnies’ beyond art and into a fully-realized narrative.

This NFT isn’t just a collectible; it’s an experience where you can be part of something special. For the real-world give-backs, the team will be donating ten trees for every bunny minted through One Tree Planted.

Frank La Natra is a renowned, award-winning tattoo artist based in Pompano Beach, Florida. He is the founder and owner of Into the Woods Tattoo Gallery and La Natra Art Studios, where he does freelance work as an illustrator and character designer. Frank enjoys working in various mediums and substrates, primarily tattooing and digital.

Originally born in Brooklyn, NY, Frank La Natra began his artistic endeavors as a talented bass player, soon after being drawn to the world of tattooing and animation. He would formalize his pursuits as a professional artist by attending the School of Visual Arts and the Art Institute of Fort Lauderdale, where he received his Bachelor of Science in Illustration. He is currently in the works on his first-ever NFT drop, “The Battle Bunnies,” expanding his love for art into the new frontier of crypto.

Frank La Natra currently resides in Coral Springs, Florida. In his downtime, he enjoys spending time with his wife, Christa, an accomplished artist in her own right, as well as playing video games and enjoying the Star Wars franchise with his two dogs, Han Solo and Honey.

Christa Z. La Natra is an accomplished visual and tattoo artist specializing in photo and figurative realism. She is a lead tattoo artist at Into the Woods Tattoo Gallery in Pompano Beach, Florida, co-owned by her husband and creative collaborator Frank La Natra. In addition to tattooing, she enjoys working in the medium of oil and watercolor paint to bring her visions to life.

Having been inspired to draw and study color at a young age, Christa Z. La Natra sought formal education from the Art Institute of Fort Lauderdale, where she would graduate in June 2012 with a Bachelor of Science in Illustration. Her work has been exhibited and written about and has allowed her to attend events, including TattooLaPalooza in Miami, which she helped organize. In addition, she enjoys drawing inspiration from her experiences and networks, including her tattoo clients, friends, and fellow artists.

Christa Z. La Natra currently resides in Coral Springs, Florida. When she is not in the studio, Christa enjoys watching movies, playing with her dogs, and visiting the theme parks in Orlando. 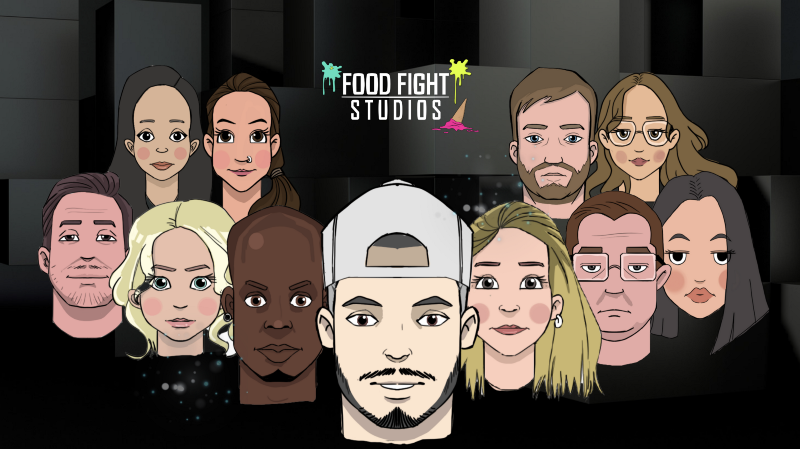 Food Fight Studios is an animation and creative studio specializing in unconventional content production. Started in 2016 by animation industry outsiders, the team now has multiple awards and recognitions, including two Emmy® Nominations and one Emmy®-Award win. From short-form content to documentaries, music videos, concerts, series development, and more, their work is on various media platforms, including Spotify, BET, Prime Video, MTV, iHeartRadio, and The Apollo Theater.

For more information or to get connected with the team, visit www.foodfightstudios.com